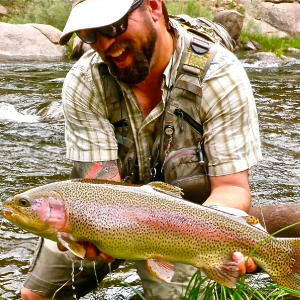 Dan grew up on the shores of Lake Erie and owned a boat before he had a car. He was a first-mate on charter boats at an early age and had his own guiding business while in college. Dan was fly fishing before Brad Pitt made it cool. All the way up to today…In 2020 he guided a client to 12 new IGFA world records at his lodge on the Holitna River in Alaska and was awarded IGFA Guide of the Year in 2019 and 2020.

He has taught the skills of fly fishing, guided fly fishers throughout Colorado, Wyoming, and Alaska, and hosted fly fishers from all over the world at his lodge in Alaska.

When not on the river, you’ll find Dan making big fat steaks for the guests at his lodge and last, but not least, enjoying a great whisky and a good cigar. 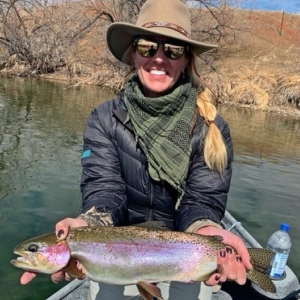 Aimee was born and raised in Michigan where there was a lake in every direction. As a young child, she was fishing with a can of worms and a hook which eventually led to years of conventional fishing with her own boats. In high school, after purchasing her first aluminum boat she even engineered a bike wheel to the front so she could get it in and out of the water on her own. She still wonders why she didn’t have any dates back then!

Aimee moved to Colorado 11 years ago to pursue a life of climbing and mountaineering. After repeated setbacks with injury, she decided to learn something different and picked up the fly rod for the first time several years back. She was hooked! (see what we did there) Fly fishing has been a way for her to revitalize her relationship with the outdoor world and find that connection to nature again. Now, in her extensive travels all over the country, she seeks out the local waters and enjoys learning about the fish she has yet to catch.

From hooking rainbows in the Big Horn River of Wyoming and the White River of Arkansas to watching the browns rise at home on the Colorado, Aimee has shown a passion for fly fishing that is still expanding. These days, you can still find her climbing mountains…but now she has a fly rod strapped to her pack. 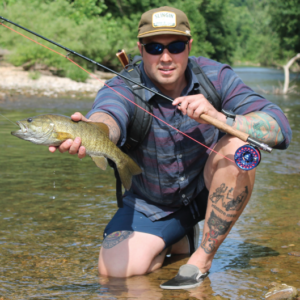 Jon was born in St. Augustine, Florida, in 1989 and lived in Florida until 1997, then moved to Cypress, Texas. His fondest memory and passion for fishing started at a young age when his father, David, chartered a deep-sea fishing boat from Surfside Beach, Galveston, Texas. After a grueling 70-mile trip into the Gulf, Jon used a large conventional fishing pole. With his father’s assistance, he cast only to find himself fighting a near 50 pound kingfish instantly. Kingfish! After pulling the massive Kingfish from the deep blue Gulf of Mexico, Jon’s love for fishing started.

Over the years, Jon mostly grew up conventional fishing small creeks, rivers, and Texas lakes. In 2010, Jon joined the United States Army as an Infantryman. This role has taken him all over the world, and he currently resides in Tennessee.

Here Jon discovered the beautiful rivers, creeks, and vast watersheds of Tennessee and was drawn into the alluring art of fly fishing. His newfound passion is finding himself lost on the back roads of Tennessee and Kentucky fly fishing in the tributaries and tailwaters of the Cumberland River, targeting the beautiful trout and his favorite species, the smallmouth bass. Jon is currently transitioning out of the Army to start his own outfitters, guide service, and fly shop in Tennessee. 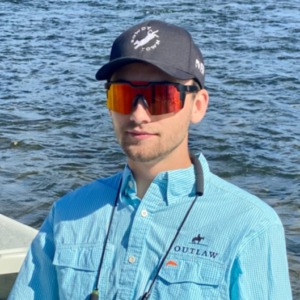 Grayson was born and raised in Colorado and grew up fishing the Colorado River and many other amazing fishing spots in and around the Denver foothills area. Learning to fish is pretty much all self-taught from spin fishing then moving on to the art of the fly rod.

Now residing in Big Sky, Montana where he fishes the Gallatin and Maddison Rivers. Grayson finds himself shadow casting and living the “River Runs Through It” dream! He finds a passion in teaching others and introducing them to the amazing sport we all know and love.